Cookies help us deliver our services. By using our services, you agree to our use of cookies.

From Experimental Hydrology Wiki
Jump to navigation Jump to search 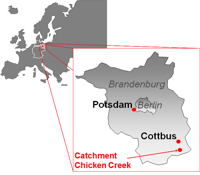 Location of the catchment 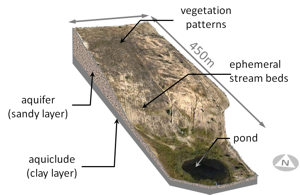 Aerial photograph of the catchment with structural elements

The Chicken Creek artificial watershed is located in the lowlands of northeast Germany. The site falls within the region of Lower Lusatia in the State of Brandenburg, about 150 km southeast of Berlin close to the Polish border and is situated south of Cottbus in the State of Brandenburg (51°36' N 14°16' E). The name deriving from a former small stream (the Hühnerwasser) destroyed by open-cast mining activities during the 1980s.

The catchment has an areas of 6 ha.

The climate of the region is humid with some sub-continental influence. Minimum temperatures occur in January with an average of -0.8°C; the average maximum temperature of 18.4°C is reached in July (according to 1961-1990 data from Cottbus weather station, DWD). Annual total rainfall is comparatively low at only 563 mm, with Lower Lusatia experiencing some of the lowest precipitation levels in the whole of Germany.

The region is predominantly affected by both Pleistocene glacial influences and by more modern anthropogenic disturbance including large-scale open-cast lignite mines. During the Pleistocene, the Elster and Saale ice ages were mainly responsible for the geomorphologic formation of the surrounding natural, i.e. non-mining affected, landscape. The artificial watershed itself is located between these two major glacial valleys in a landscape originally shaped by a terminal moraine deposited during the Saale stage (Warthe stadial). The catchment was constructed between May 2004 and September 2005 by large mining machinery, including conveyor belt systems involving bucket wheel excavators and coupled stackers. The aquiclude was built in the form of a 1-3 m thick layer of Tertiary clay. This clay material derives from local geological layers identified as ‘Flaschenton’ and is supplied as a by-product of the activities of Welzow-Süd open-cast mine. On top of the clay layer sandy substrate material was dumped, again by stacker in steps with a thickness of up to 3.5 m, with the aim of providing an aquifer for the establishment of a local groundwater body. This mixed sandy material was sourced from a variety of Pleistocene sediments from the fore field of Welzow-Süd, where they had been deposited during the Saale-glacial period as part of a terminal moraine and lodgement till layers.

With a total area of around 6 ha (400 m x 150 m), the catchment takes the form of a slight hill with a mean altitude difference of 15 m along the main axis and absolute heights ranging from around 125 m a.s.l. at the outlet of the catchment up to a maximum of 140 m a.s.l. The average longitudinal slope is 3.5% and the exposition is SE. The catchment can be divided into the following major sections: (1) The weakly inclined backslope area which covers the main part of the site, (2) The more steeply inclined footslope, (3) The pond basin containing the single outlet

Since autumn 2005 the site has been left for unrestricted and unmanaged succession. Neither amelioration measures – such as fertilization or liming – nor any artificial re-vegetation has been undertaken, but erosion and other natural surface-forming processes have been allowed to occur without restriction. The vegetation development in the artificial catchment Chicken Creek has been documented annually since the beginning of ecosystem development in autumn 2005. A regular net of permanent floristic monitoring plots with a distance of 20 m had been established in October 2005. For each plot all vascular plant species, for each vascular species the current cover, and the total bryophyte cover are annually recorded. The vegetation in the catchment developed quickly, starting in 2005 with a few seeds of a few species in the soil seed bank as well as with seeds of mainly anemochorous species invading from outside. In the course of time the total vegetation cover consistently increased quickly. In 2015 a total of 170 vascular species occurred on the plots. Spatiotemporal species distribution patterns emerged and are in the focus of the durrent investigations. More than 4,000 indivdual trees are already present at the site.

Built in 2005 the constructed Chicken Creek Catchment is a multi‐disciplinary landscape observatory offering multiple opportunities to explore the initial phase of ecosystem evolution. The ongoing primary succession is not influenced by anthropogenic measures so that ecosystem self‐organization as well as the development of structural elements and patterns can be observed in both terrestrial and aquatic sub‐systems. The construction of the 6 ha large site allows for the development of a local groundwater body enabling investigations of feedbacks between e.g. hydrological and geomorphic or botanic structural elements.

The overall aim of the studies at the Chicken Creek Catchment is to elucidate the role of structures and processes during the initial establishment of an ecosystem. The original hypothesis assumed that initial patterns substantially define and shape both the development and later stages of an ecosystem. The main objectives of this collaborative project were (1) to reveal which abiotic and biotic structures and processes control the initial phase of ecosystem development; (2) to investigate the interactions existing between both abiotic and biotic processes and patterns in the initial phase; (3) to characterize the differences between processes and patterns of initial-phase systems compared to mature ecosystems; and (4) to derive and define the different stages occurring during early ecosystem development.

Within the catchment monitoring of environmental parameters is carried out to measure meteorological, hydrologic and soil conditions as well as deposition inputs. The permanent monitoring installations are oriented along a regular grid of 20 x 20 m with marked grid points. Rows in NE-SW direction are numbered from 1 to 7 and rows in NW-SE direction are labeled with A to V. In a first step soil samples have been taken in autumn 2005 at each grid point which proved the Quaternary substrate to be relatively homogenous both spatially and with depth. In addition to these permanent installations other measurements, records and samplings are carried out with respect to vegetation, soil fauna and limnology. Aerial photographs are taken regularly in spring, summer and autumn using a microdrone.

More than 30 observation wells were installed to record groundwater levels. Some of these observation wells are equipped with water level loggers (pressure transducers). Measurement of the outflow of the whole catchment occurs at the outlet point of the pond. The outlet gauge was designed to measure discharge rates up to 250 l/s. This weir is a combination of tipping bucket and compound weir. Early erosion events resulted in the formation of a network of erosion gullies. Runoff components in these gullies are measured using stainless steel (V2A) H-flumes combined with tipping buckets.

Tensiometers are used to measure matrix potential. Soil water content is measured with FDR-probes at 0.15 m, 0.3 m, 0.5 m and 0.8 m depth. To allow permanent access for soil solution sampling four soil pits were installed in the catchment. From these pits boron silicate glass suction plates (with a diameter of 10 cm) were installed into the soil. The soil solutions samples are measured for pH and electrical conductivity as well as for concentrations of cations and anions, DOC, TOC, TIC and TN.